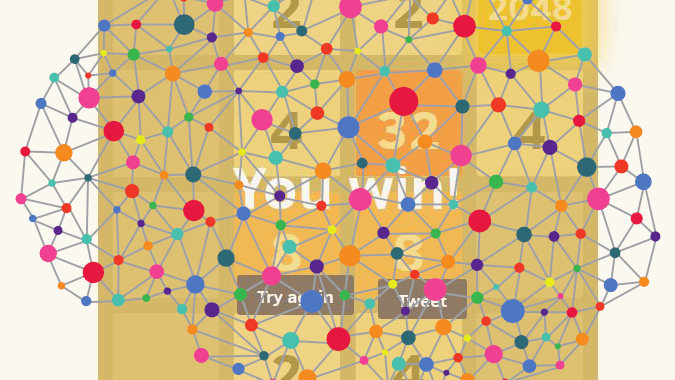 This fourth blog post concludes my personal project of developing an AI-based 2048 video game in Python 3. Feel free to check the first blog post of this series out if you haven’t read it yet.

If you want more details, the source code of the project is also available on Github.

This fourth and last post will focus on implementing the Neural Network itself and show a basic train/play cycle. Initially, I also wanted to demonstrate how this AI-based 2048 was (almost) always performing better than a Human but, well, you will see that it did not go as good as planned… 😀

What is an artificial Neural Network?

Simply explained, a Neural Network (also known as artificial Neural Network) is a collection of connected nodes that is able to generate output(s) according to some input(s), based on the connections between its different nodes.

The figure below shows a common representation of a Neural Network with three layers (Input, Hidden, Output) and multiple nodes (or neurons, in reference to the biological brain).

Although each neuron seems to be connected to all nodes of the subsequent layer, it is a bit more complicated than that. In fact, just like in a biological brain, neurons communicate with each other thanks to synapses (the edges in the figure). Each neuron has a certain sensitivity level (often modeled thanks to an activation function and a threshold), which prevents a neuron to be activated if the stimulus was not strong enough.

Regarding Neural Networks, the whole point of the learning process is to determine how strong should the signal be (i.e. the stimulus) passing through each connection. For that reason, the Neural Network has to be appropriately trained on a representative training set (the more representative of the future inputs, the better).

I won’t go in more details about Neural Networks but you can check the two following websites if if you want to learn more:

How did I apply Neural Network to the 2048 video game?

The Neural Network that I defined was quite (too much?) simple. It was composed of:

As a reminder, below is an example of a 2048 game log history:

Well, yes and no. Yes because my program was able to play an entire 2048 game autonomously until it was winning or loosing. And no because it didn’t perform as good as expected (spoiler alert: it was only loosing).

A simple example being worth a thousand words, below are three GIFs showing the start of three different 2048 games:

By taking these three different 2048 games, after 8 rounds, we can notice the following scores:

The fact that one playing randomly could achieve better results than a trained Neural Network could be a bit surprising. In reality, it just means that my Neural Network was not trained in a proper way and/or was just not suitable for this type of problem.

Many possible improvements could be imagined in order to improve the average score that my AI-based 2048 program was getting. For instance:

That’s all folks, I hope that you enjoyed this series of blog posts on 2048 game, AI and Python. I honestly didn’t think that writing these four blog posts would take me that long. It is one thing to develop a program/software/algorithm but it is really another exercise to explain why and how we did it.